Just a week or so shy of April, but here is an update for March. I’ve been working hard on revising book six. Most of it seems to be going well, but the opening chapter is still not to my liking. Part of the problem is finding the right viewpoint to start with. I have several ideas, and I have tried a few different voices, but none of them seem to bring about the desired results. The chapter I write, and there have been several of them, just doesn’t fit the tone of the rest of the story though everything discussed is correct and it’s true to the viewpoint I’ve chosen.

Part of the problem is the story wants a particular explanation of certain events and the voices I would like to tell it from can tell it, but not in a way I am pleased with. Until I can find either a new voice that fits what I want, or find a new voice with a different set of events that leads into the rest of the story, I find myself at a block or sorts. I have written several thousand words that I have thrown out, and I have managed to ignore the lack of an opening chapter so I could work through the rest of the novel, but the unfinished and missing chapter hangs over my head.

It’s also one a few things hanging over my head that are tied to writing, and therefore this series. It’s never been easy for me to hit the ‘go’ button on publishing, and four years into it hasn’t made it any easier. In fact, it’s become more of a struggle. I’ve said this before, and I’ll say it again: I’m uncertain when or if book six will get published.

But, I’m still perhaps foolishly optimistic that it will happen and it will happen this year, so I will keep trying to find the true and fitting view point to start the novel with and catch everyone up to date on the events that have occurred between The Ripples of War and this novel.

I’m still leaning heavily toward Kahreisa as the preferred character to open the novel as my other leading choice is one of the last remaining Shades who is getting a new name because he’s decided he wants to be an active member of Z’s world, and he’s currently the man who closes the novel. Viewpoints are already being repeated and, unfortunately, some of them *coughNivaradroscough* like to hold sway over my fingers when I type despite my desire to keep them off the page and limit how much of the story they take over. Granted it isn’t just the temperamental Dragon, a certain Alantaion and Ryelention also like to steal extra time in the spotlight.

March has also been a challenge due to financial trials and a couple personal health problems as well as a family member’s health problems, but hopefully those can be resolve or turned into something I can manage. I’m currently in quarantine for COVID due to my boss not sending a coworker home who insisted on coming to work for several days while ill who then tested positive to COVID (I also have mild symptoms and had to argue with my employer over how quarantine is actually supposed to work) so if I can ask one thing of anyone who reads this, if you feel ill at all, please stay home until you are feeling better!

Wishing everyone who reads this good health and good days ahead if they have not already had them, and a continuation of them if they have. I typically don’t offer snippets of a WIP, but I’m feeling adventurous while suffering from reoccurring imposters syndrome, so here is a brief, unedited look at some of the drama I’m dealing with in the next book in Z’s journey. 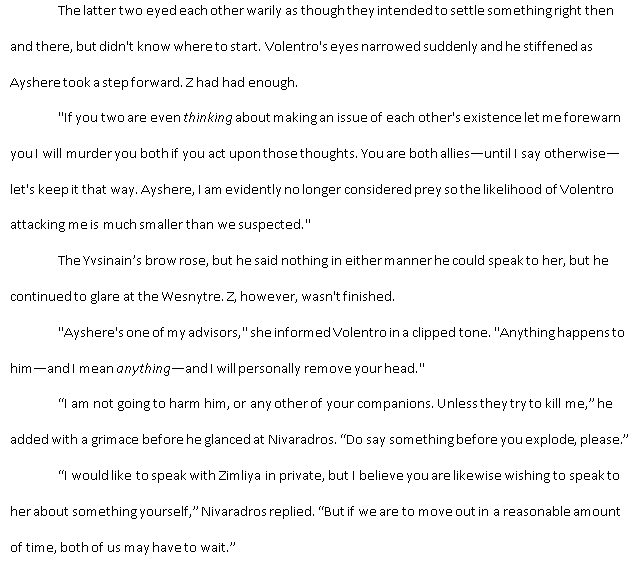 ***Remember this is unedited and in the middle of revisions so it may change greatly or disappear entirely, but the tension between these two has been driving me and most of the other characters crazy and, since I have no idea when the book will be released, I thought I would share.

Here’s to a calmer April and a better update!

View all posts by meagannhurst

This site uses Akismet to reduce spam. Learn how your comment data is processed.